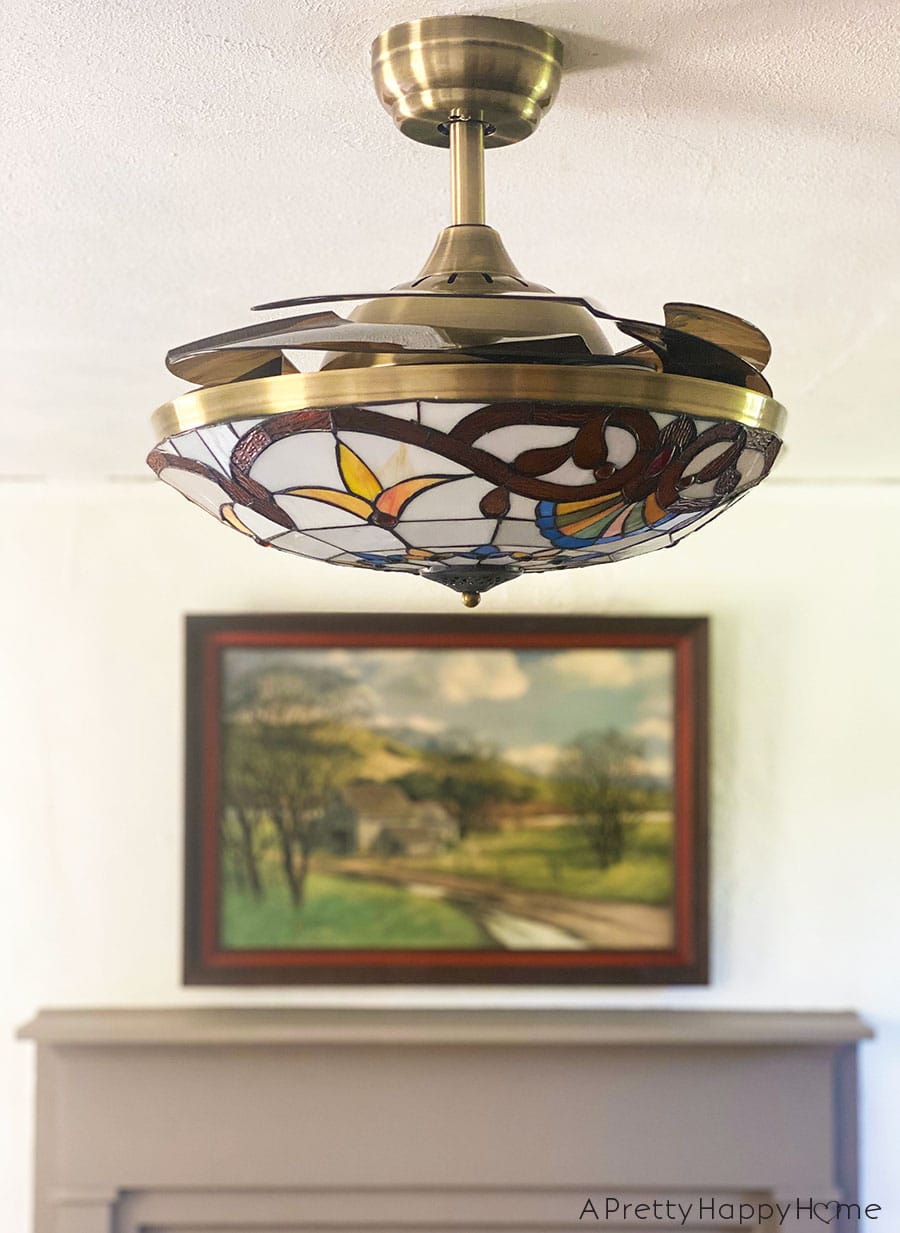 We have a new Tiffany-style bedroom ceiling fan and I’m extra excited about it because you all helped me select it!

Didn’t know that, did you?

Technically, you helped me select a ceiling fan for our music room, but we had old house issues that prevented us from installing the fan in the music room.

(Click here to catch up on what we installed in the music room instead.)

And I’m being generous with the word “helped” because the ceiling fan votes were evenly split.

Since there was no clear ceiling fan winner that just tells me you are an opinionated bunch. 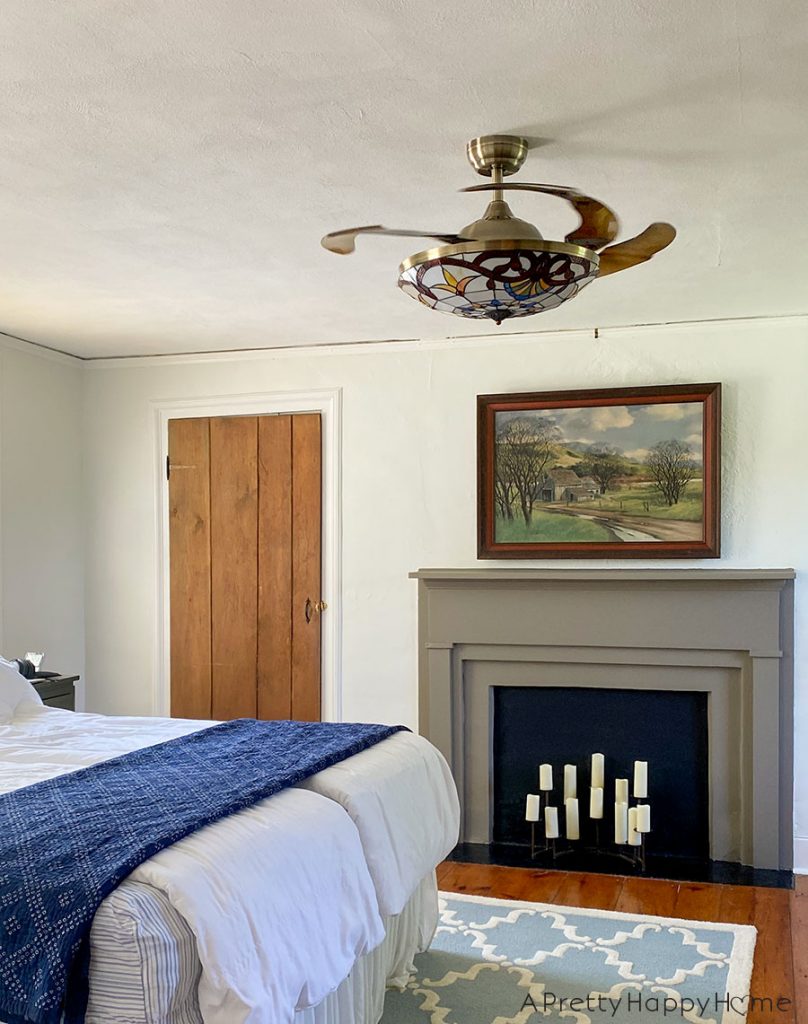 However, it meant I had to put on my big girl pants and make a decision all on my own.

By the time we figured out we had some old house issues that prevented us from installing the ceiling fan in the music room we’d already unboxed the ceiling fan.

That made returning it a pain. So we kept the ceiling fan and it sat in the garage mocking us for months and months. If 2020 wasn’t traumatic enough we had a ceiling fan mocking us with our inability to install it.

Fast forward to last Saturday and Handy Husband asked me what I wanted to do that day.

It was as if Willy Wonka himself handed me a golden ticket good for one honey-do chore and I knew exactly how I wanted to spend it. Oh, yes. I wanted the ceiling fan installed in our bedroom and no old house issues were going to stop us!

That was probably the last golden ticket I’m going to get, but it was totally worth it because the new Tiffany-style ceiling fan in our bedroom looks better than I imagined it would. 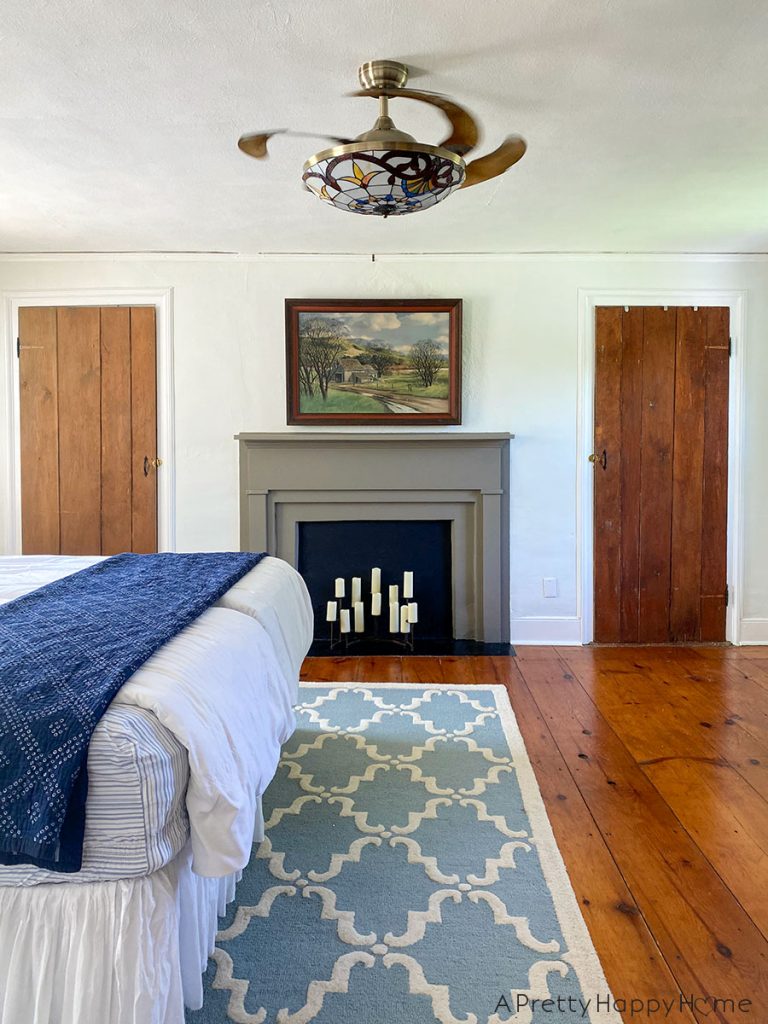 I am well aware that this particular Tiffany-style ceiling fan is not everyone’s cup of tea.

In any other house it probably wouldn’t be my preference either.

Have I ever mentioned how we don’t have light switches in our bedrooms? 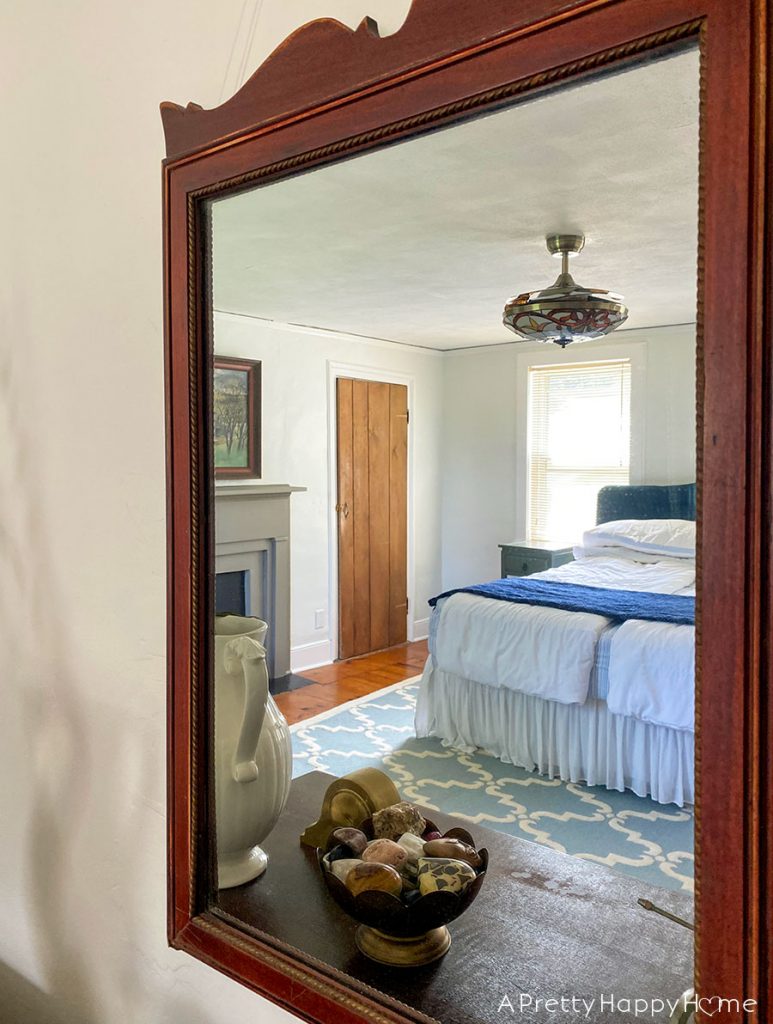 Our Colonial Farmhouse was indeed built prior to the invention of electricity and indoor plumbing. The fact that we even have wires for lights in our bedroom ceiling is a boon.

No need to go wild and connect those lights to light switches when you can just stumble through a dark room to find the pull cord to turn on the light. Right?

Pull cords on lights and ceiling fans work great, but do you know what works even better?

It’s akin to skipping over a landline phone and going straight to a cell phone.

The ceiling fan remote controls not only the fan speed and the light on the fan, but the temperature of the LED light bulbs too. Warm light? I can do that. Day light? No problem. Cool light that does nothing for anyone’s skin tone? I got you covered.

Perhaps my favorite part of this Tiffany-style ceiling fan is that the fan blades are retractable! I don’t have to look at them (well, they are sort of visible) when I’m not using the fan part of the ceiling fan. It’s like having long, lean legs AND a flat, toned stomach.

The biggest thing I’ve learned about home improvement and decorating is that you have to roll with the unexpected. I didn’t buy this Tiffany-style ceiling fan for our bedroom, but I’m so happy with how it all turned out.

P.S. Picture scale is deceptive. This room has almost 9-ft. ceilings, so we don’t whack our head on this ceiling fan. This was not the case with the old fan installed in this room, which hung lower.

Painting: Thrifted (read about it here)

Fitted Striped Sheet: Did you know Target sells fitted sheets by themselves now? It’s awesome. That’s how I purchased the fitted striped sheet since I didn’t need a top sheet.

Thanks for spending part of your day with me! I appreciate it. Here are some other posts you might enjoy. 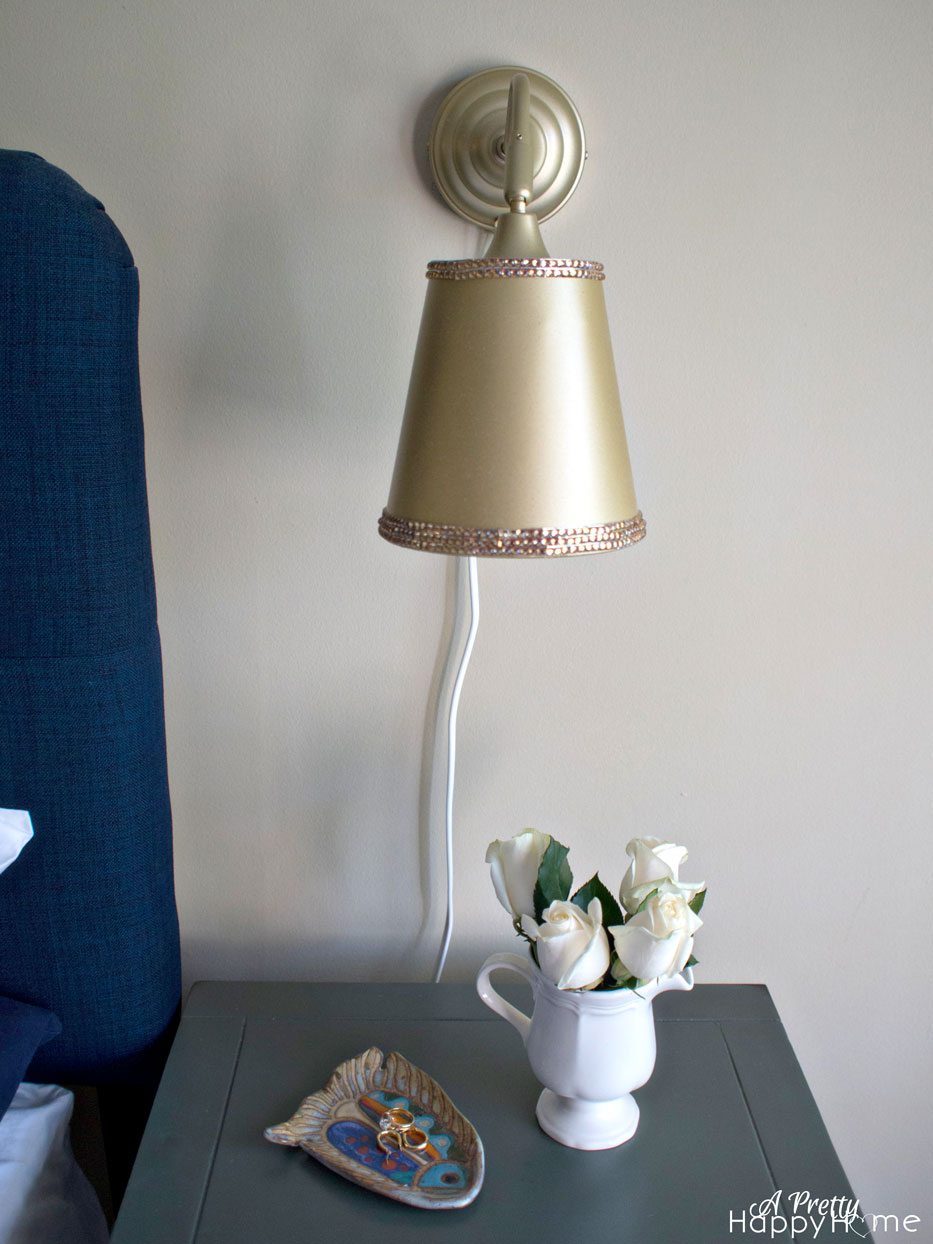 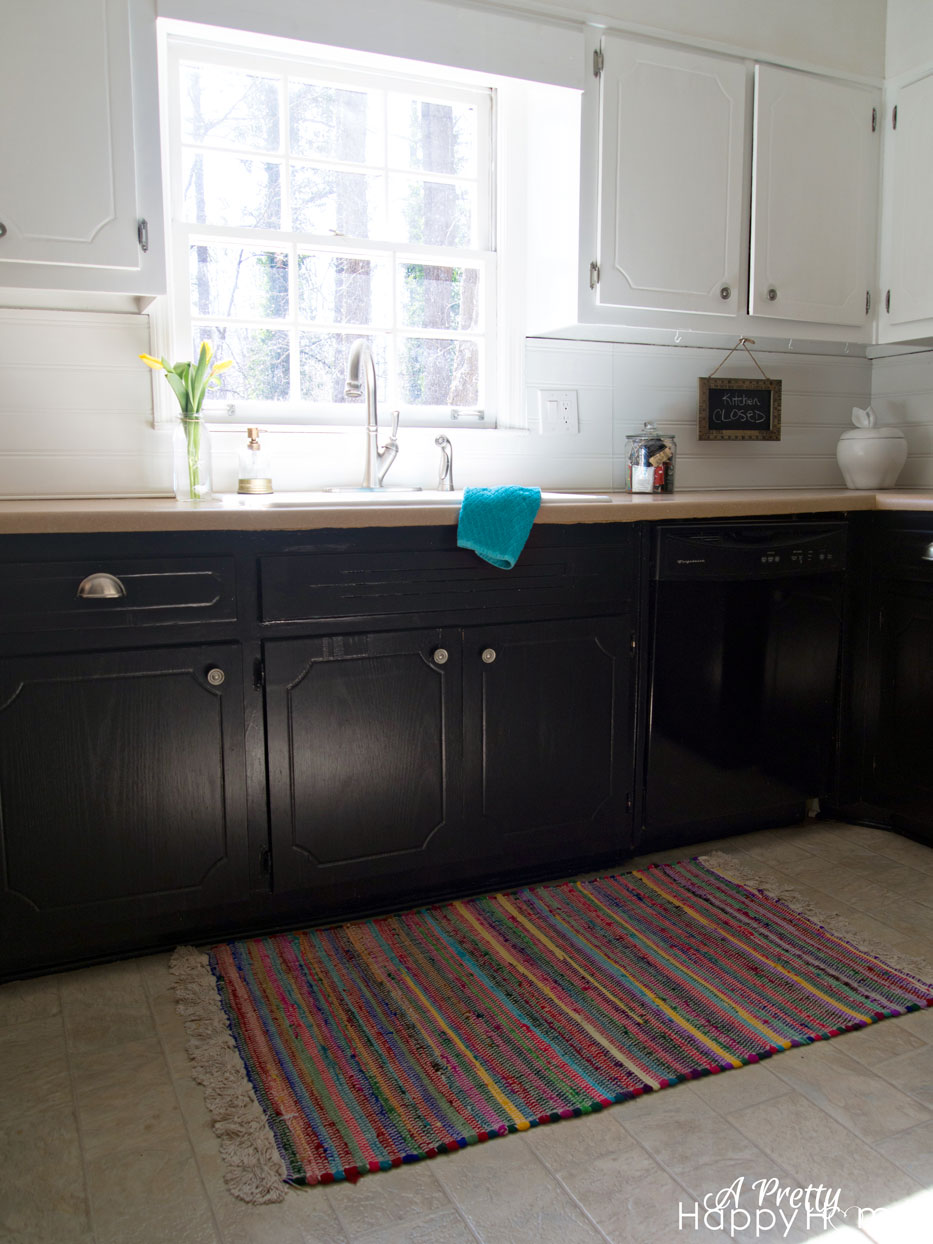 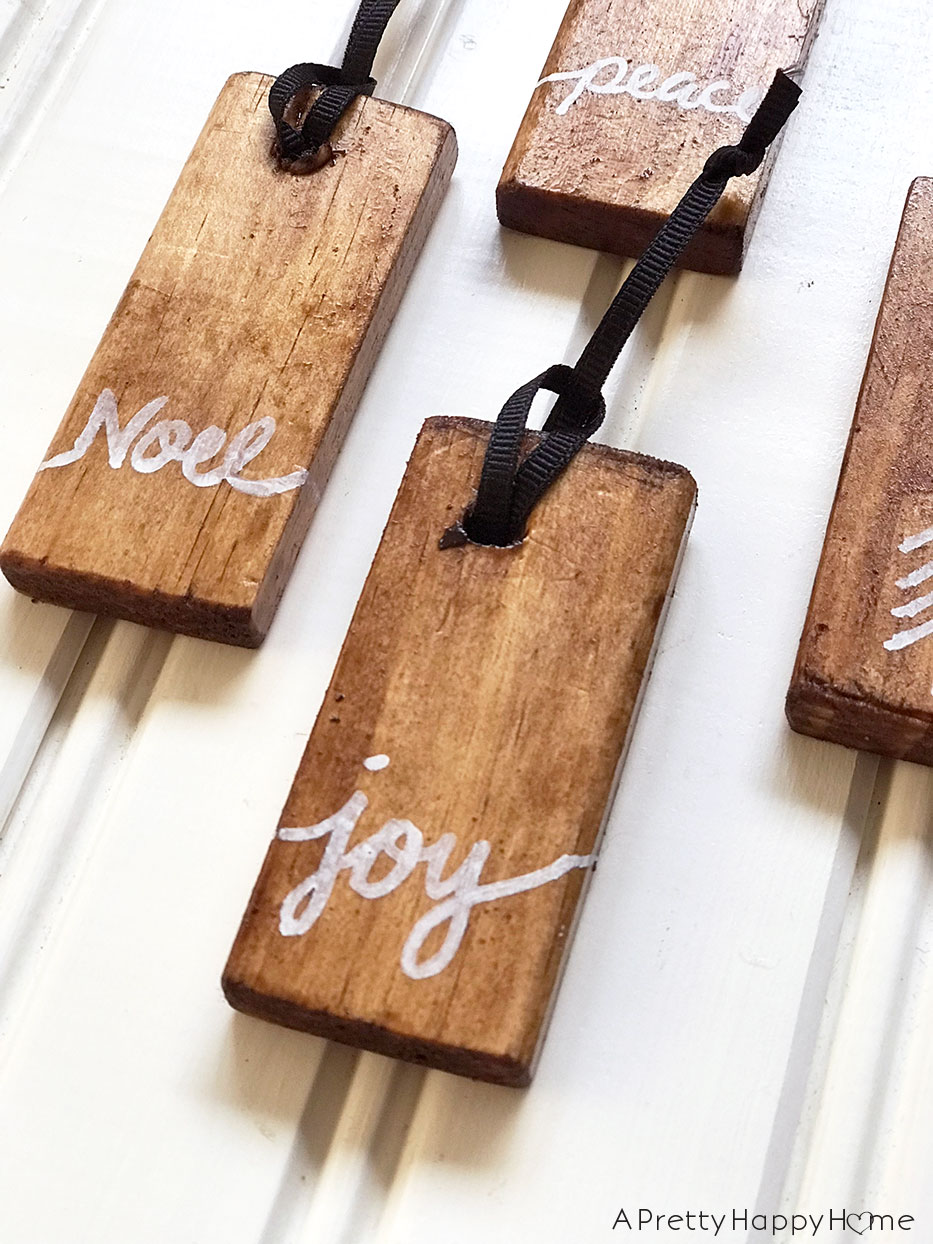